Posted on October 3, 2015 by TheAdventurousOne

Let me first apologize before hand to those of you who are signed up to receive notice by email when I  update the blog. There have been a few in the past couple of days and I’ll do a few more over this weekend. This week has probably been the busiest since I’ve been here.  I’ve got lots to post about and I’m going to break it down into more than one entry.

This time last week, I was on the lovely Jeju Island off the southern coast of South Korea.  After getting on the tour bus at 2:15am early Saturday morning and riding through the night, we took a Ferry across to the island.  It was a relaxing and leisurely ride.  (On the way back we took the “Express Ferry.” Different experience all together, never again.) 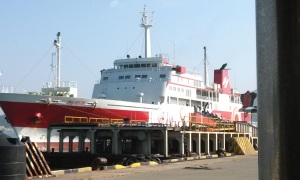 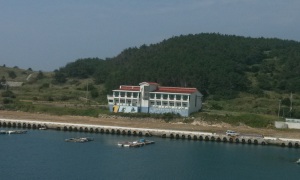 After the Ferry ride, it was onto the tour bus and immediately on to the first stop on the tour. (We didn’t get to our pension until later in the evening.)

First stop was 용두암, or Yongduam.  It’s this rock that if you look closely, looks like a dragon.  One story of how it came to be says that the dragon was shot down by the ‘mountain deity’  for trying to steal jewels.

The lady who took this picture told me it’s considered good luck to touch his nose.

We also drove to an area called “Ghost Road” or “Mysterious Road.”  Basically, we got to this road, the bottom of a hill, and the bus shut of it’s engine.  It proceeded to continue it’s way to the top of the hill. Uphill. No engine. I’m sure there is a logical explanation.  It was pretty interesting.

Then there was Loveland.  I don’t even know how to describe it, other than to call it an art museum dedicated to pieces that are all about sex, sexual positions, and…well, you get the picture. Oh, wait, I have pictures! lol. Here a a few of the more humorous and tasteful things. 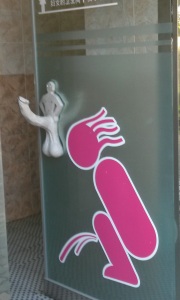 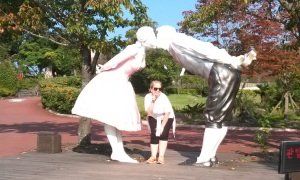 So, that was about it for day one. After this we made our way to the pension.  I didn’t take pictures of that.  For the curious, there was six of us in one room, and one bed. So, two slept in the bed and the rest of us sleep on the floor. There are sleeping mats for this, but I didn’t find it all that comfortable. But, it’s very Korean, I’m told.

Anyway, I’ll post more tomorrow or later in the week on the rest of my trip.   TTFN.

This entry was posted in Korea. Bookmark the permalink.

1 Response to Jeju Island. Day One.